Message from the Chairperson

You should not miss business opportunities in Kobe. We shall be more than happy to support you if you may be interested in doing business with Kobe companies or in making a direct investment in Kobe.

Overview of The Kobe Chamber of Commerce and Industry

The Kobe Chamber of Commerce and Industry was established in 1878. It has been functioning ever since under a specific national law defining Chamber activities as the function of an essential economic organization in this region. The KCCI contributes to the development of Kobe under its four principles of Democracy, Public Welfare, Impartiality, and Internationality.

The role of a Chamber of Commerce and Industry is, in general, to serve the local business community in an effort to broaden and deepen its economic base and to nurture a business environment. The KCCI aims to organize itself in order to most effectively respond to the needs of its members and the region. This Chamber has at present about 12,000 members, representing the mainstay of Kobe’s commerce and industry.

The KCCI is governed by its members through an Executive Board. The members elect 140 councilors who, in turn, elect an executive board consisting of a Chairman, 5 vice-chairmen, a president, 38 executive councilors, 3 auditors and 4 directors. The president and the 4 directors are members of the professional staff of the Chamber.

Organization of the KCCI 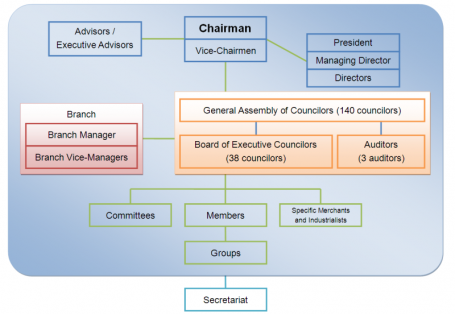 ■Prerequisite for Membership
Regardless of its scale and nature, any business which has been in operation with business premises in Kobe City will be allowed to join as a member.

■Application
Please direct your application and inquiries to the Secretariat.

●Specific Merchants are required to pay a separate operating fee of 4,500 yen (annual fee).
●Initial administrative fees, membership fees and specific merchants’ fee can be written as a loss for accounting purposes. Consumption tax is not charged on these fees.
●Members are entitled to elect and to be elected as councilors of the KCCI every 3 years. The number of votes depends on the membership fee amount. Special members are not entitled to vote.